Info on How You Can Beat Depression, Anxiety, Sleep issues with Light

If you wonder how you can beat your depression, anxiety or sleep issues, I've stated below several studies that show evidence that bright light indeed can help you.
Then there's information on how to use light therapy and when.

Combination of Bright Light and Antidepressant Drug.
Combining the light therapy with a medicine such a Fluoxetine - may be the name Prozac sounds more familiar to you - influences chemicals in the brain that may be unbalanced in people with depression, panic, anxiety, or obsessive-compulsive symptoms, gives best results.

Hopefully your condition is as such that you can do without medicines and just use the light box.
For non-seasonal depression you may also read: Major Depressive Disorder (MDD), Unipolar Depression or just Major Depression. 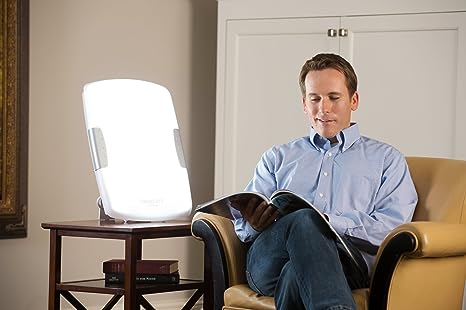 In the trial, patients were exposed every day for half an hour to bright white light emitted from a 10,000 Lux device.

These light treatments were done in the early morning right after the patients got up and did some kind of activity as there is no need to look at the light as long as the light comes to your eyes from the side.

What bright light also does, is increasing the levels of neurotransmitters like serotonin. And that's what antidepressants do also.
Serotonin - a chemical - transmits signals in the brain.

Researchers emphasize that light therapy can be considered as a valued additional treatment for people with non-seasonal depression or major depression (MDD).

No connection between depression and low level vitamin D?
Research showed low levels of vitamin D in people suffering from depression.
It is also known that the vitamin influences brain development and its function. However, other research did not indicate that the vitamin reduces the symptoms of depression when patients got extra vitamin D.


Besides the kind of illness you read above, bright light therapy may also have a positive influence on people with bipolar disorder, chronic pain or even dementia.

But it can give you energy, improve your mood and that way ease your life quite a bit.
Some people already may see improvements within a couple of days. For others it may take a bit longer.

Maybe you also want to read the blog of Dr Rosenthal, the first doctor who applied light therapy as a treatment of SAD.


Lux, the unit of illuminance.

What is a Full Spectrum Light.

Sometimes you see the words "full spectrum" in information about light.
Well, it doesn't has a technical meaning. With these words the writer wants you to know that it is about light that you can consider as being equal to sunlight or natural light.

A new development recently came to "light" in the form of the mySun desk lamp created by startup Sunlight Inside. With the new lamp they try to deliver to you the health benefits of natural light.

According to the press release, the lamp which clamps directly to a desk or table, provides the perfect light to improve vision, support mood, boost energy and enhance sleep. The lamp which is handmade and sustainably sourced in California, automatically reproduces the daily and seasonal cycles of natural light.

With the earlier introduced Bottled Sunshine lamp, - the mySun desk lamp can be ordered now at Kickstarter - naturally energize you with sunrise in the morning, and lift your mood with cool and bright light throughout the day. In the evening, the lamps provide sunset and then warm, soft candlelight which helps signal your body to relax and sleep.

According to the Sunlight Inside company, their products last 10-20 years without ever needing to change the light source and are very energy efficient. The lamps come with a mechanical dimmer and can also be controlled through the use of an iOS app. 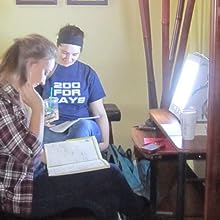 That's why certain light therapy devices emit that blue-enriched white light. See some lights here that are blue-enriched, such as the Naturebright Sun Touch Plus.

A new idea to supply people suffering from SAD with wearable lights, created by a industrial design student. or see the video.

How To Use Light Therapy.

Usually it is recommended that your face is at approximatively 12 to 24 inches from the light during 30 minutes, which is usual for a 10,000 lux light box. Mind that 30 minutes is an average. Many people feel comfortable with it, but may need just 15 minutes or other may need an hour. Do follow the instructions of light device manual or conssult your doctor.

Greater distance.
Regarding the distance, there are also people who have more benefit by a bit greater distance from the light, but for a longer duration.
Also using the light box in the afternoon seems the solution for some people. It can be quite personal what your experiences are.

Activities and open eyes during light therapy.
Of course, you need to keep your eyes open as such a light therapy is mainly meant for the eyes.
During a session a lot of people prefer doing something such as eating, reading, watching TV, using a computer. Have the light a bit left or right from your head, so you won't look into it directly.

When To Use Light Therapy.

Feeling very unmotivated, lacking in energy, down mood, can't concentrate, lack of interest, tearfulness?
Or may be depression is interfering with your function, in your work or in your relationship.
First of all, consult your doctor if it is a good idea to have light therapy in your situation.

As you could read here earlier, studies show that you can use light therapy for seasonal affective disorder as well as major depression.
A lot of people benefit from light therapy when done in the morning, say just after awakening. It is important to do that every morning, so make it daily routine.
But again, as said earlier, some people benefit more from the light by using it in the afternoon or evening.

There now light therapy through ear buds to reach the photoreceptors of the brain, helping those who may have te winter blues, sleep isues, or just want more energy and alertness.

For the Human Charger, see the Amazon #ad link Here for more information, reviews and pricing..

In case of jet lag, you can use critically timed light sessions.

An example of a wearable light therapy device.
Our internal body clock is believed to be of great influence on certain body processes and disorders.

Seen in that perspective, a light-oriented development that came to the market recently, are the Re-Timer glasses.
An ultraviolet-free green light shines into the wearer's eyes to help adjust the body clock to sleep routines.

What Also Helps Against Depression

Besides natural sunlight, sunlight simulation by light therapy, antidepressant medication, there's more what also seems to help when being depressive, is:

- Being active.
Being active, doing something, exercise, walk... It doesn't matter what, as long as you're active.
If you shrink from a task or difficulty you might split a task up in small ones. Doing small things at a time is often easier to do.
Setting priorities is also helpful.

- Getting social.
Another thing you can do, or already do, is getting social, spend time with other people.

- Massage chair.
Using a massage chair may give you deep relaxation and regenerative effects on your body and mind.